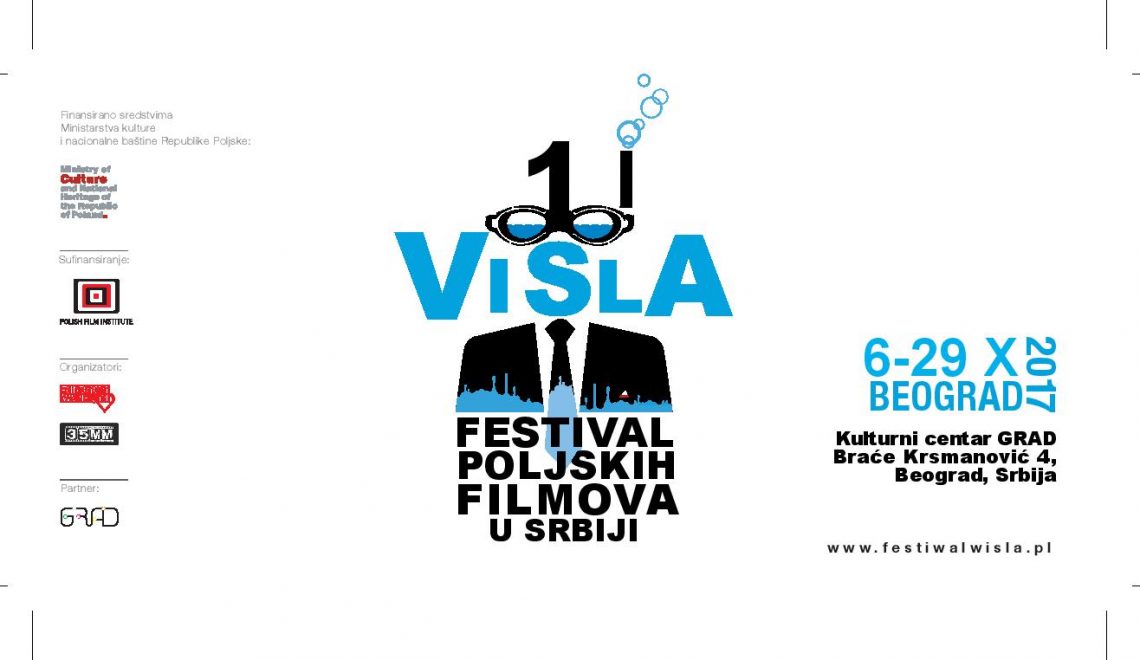 ‘Vistula’ Polish Film Festival has been held in Russia for 10 years, making it a significant point in the calendar of cultural events in Moscow and other Russian cities. We try to expand the boundaries of the project every year, presenting Polish cinema also in other countries.

In 2017 the ‘Vistula’ Festival will be held for the fifth time in Tajikistan and the second time in Azerbaijan, where Polish films are becoming increasingly popular. This year we have decided to go for the viewers in Serbia and Georgia, organizing first editions of the ‘Vistula’ Festival there. We firmly believe that we will find lovers of Polish culture among residents of these countries and in the wake of Russia, winning  a permanent circle of festival viewers will be possible.

The 1st Polish Film Festival ‘Vistula’ in Serbia will be held on 6-29 October in Belgrade in The GRAD European Centre for Culture and Debate and on 17-20 October in Niš at The Pupets Theater.

Serbian audience will be given a unique opportunity to watch and evaluate the latest masterpieces of Polish cinema as well as the films that have been presented and awarded at the most important Polish and  international film festivals. We dare to say that their quality is no way worse than the best  Western productions. ‘Vistula’ Polish Film Festival will be a real  feast for all the movie enthusiasts, craving for rare, genuine, exclusive and valuable artistic experiences and entertainment not widely accessible in local cinemas. The Festival is accompanied by various artistic events, which will make a point not only of Polish cinematography, but also music and art.

The international ‘Vistula’ project shows the representatives of different cultures the most outstanding Polish films that outline the wide prospect over our country and its people. The Vistula Festival brings the nations together through the cinematic screen which is a platform of understanding and communication not only in the cultural but also in the human dimension.

This is an extraordinary love story of two young people balancing on the border between life and death. The initiator and idea maker of the movie was Magda Prokopowicz, the president of the Rak’n’Roll Foundation. She died in 2012. Although the film was inspired by the events of her life, the authors didn’t mean it to be a biographical film, it’s script evolved into a universal love story, which is not a documentary of Magda’s life.

Ania is a charming, romantic but not very self-confident teacher who is looking for a perfect man on online dating websites. By chance, on Valentine’s Day, she meets showman Tomek, who hosts the most popular and controversial TV show in the country. Attracted to Anna’s incurable romanticism, he wants her to become a heroine of his show – she will be dating guys met through the Internet, while is to reveal the true faces of the men flirting in the net and ridicule of these naive women who seek their princes online. Ania’s crazy dating adventures turn out to be a great instant hit. However, one day Ania unexpectedly encounters her ideal boyfriend… the perfect guy – Anthony. At the insistence of the ruthless boss of the station, Tomek has to save the viewership of the program. Or perhaps also his own feelings for Ania?

Four women of different age – Helena, Iga, Maja and Renata explore Warsaw in search of closeness and affection. They all cross paths at the club ‘Warsaw by night’, staying unaware of each other’s presence. In their overnight drive around the city they are accompanied by randomly met people, and always the same taxi driver.

The Swedish social welfare worker Anita is trying to create a perfect family. She uses her authority to make the world a better place. Obsession for perfection leads to a tragedy – Polish immigrant’s daughter being placed with a foster family by social services. Parents facing a bureaucratic machine have no chance to win. Desperate parents undertake a dramatic fight to get their child back. Will they be able to save themselves in a dead end situation?

The film, inspired by the true story of a high school teacher who – in order to keep his job and dignity and prepare his students  to achieve their goals towards successfully passing the final exams – hides from the world the fact that he is gradually losing his eyesight. Medical diagnosis leaves no hope. The man is about to become permanently blind due to genetic defect. Initially depressed, he finally decides to hide his health problems from his superiors to keep the job and bring his students to high-school certificate. The only confidant of the teacher’s secret is his best friend Wiktor. Kacper, struggling with the new situation and new challenges, establishes a close friendship with a colleague from work and tries to help a rebellious schoolgirl who hides her own secret.

A couple of thirty-year-olds, were once madly in love, today they must decide whether the next step in their lives to do together or separately. Mania and Kamper. She is an ambitious, hardworking and clever person, who loves cooking and wants to devote herself to her passion. He is an eternal boy, who works as a computer game tester and enjoys his life without much commitment. When a mature man, recognized chef, and personification of success emerges in Mania’s life, she starts to wonder if she is still being attracted to her husband’s carefree charm and wants to spend the rest of her life with him. Kamper must get a grip on himself. But he will begin with dating a Spanish teacher with a fiery temperament.

The director tries to explain his father’s lies from the past during a conversation. The film is comprised mostly of archival VHS recording and the content seems to significantly differ from the father’s version that is hearable in the background.

An adult grandson spends some time with his grandfather who is not losing his optimism and faith in life, despite serious health problems.

A Polish coast, the end of summer. A lonely girl suffering from Tourette’s syndrome meets a boy flying a kite on the beach. She is fascinated by the control he has over the flight.

Ukrainian Olga works in Poland as a carer of a middle-aged, sickly and confined to wheelchair  man. She left her husband and a seriously ill daughter in Ukraine. Her daughter’s life can only save a very expensive surgery. The man offers Olga the money in exchange for a certain favor…

Deaf-and-dumb Maya lives in the countryside with her father. The girl helps her father run the farm business, but her biggest dream is to dance. The pragmatic father does not support her with this passion. The girl decides to run away from home to get to the ballet school exams.

The mother and her teenage pregnant daughter are looking for a hospital permitting to terminate pregnancy which results from rape.

A young girl spends an evening alone in the apartment. She decides to have some solo pleasure session, but not everything goes according to the plan.

The prisoner murders his guard and tries to hide the corpse in the forest. When a random woman witnesses this, the killer pursues her. Against all odds, she doesn’t become an easy victim, as she manages to kill her persecutor first. It turns out that disposing of a body without witnesses it is not that easy.

Justyna, a single girl in her early thirties, buys an apartment at a bailiff’s auction, regardless the risk it may bring. On the move-in to the dream house day it turns out that the keys do not fit the locks. Sometimes dreams come true in a horrible way …

At one primary school children are told to learn by heart Julian Tuwim’s poem ‘Science’. The poetic phrase is not always comprehensible, some words need clarification, but parents are coming to aid. Unfortunately, not all metaphors can be explained in unambiguous way and poetry clashes with the prose of life – especially when the Legia Warszawa match is broadcast on TV. Some pupils will get Bs, others will fail, but everyone will learn something from this lesson.

A short story of a man, a woman, their dog and couch. The days are passing by lazily on the  couch. Close but distant. However everything will change, when their pet unexpectedly disappears. An attempt of reflection on how simple and complex at the same time human relations can be.

Lucyna and Krzysztof run scrap and waste paper yard at Praska Street in Lodz. Every day they come across different people who for various reasons found themselves on the margins of society. Leaning into the small checkout window where Lucy sits, they find something more than just a payment for the scrap they brought.

BESIDE ONESELF, director: Karolina Specht

A short film about how much we sometimes want to see someone else in another person. A story of a confrontation between ideas of things and the reality.

If you want the dough to rise, mix first flour with yeast and milk. Then put the dough in warmth and wait until it rises a bit. Finally it’s advisable to knead it well, place in a baking tin and put in the oven. Be careful, or it will fall. 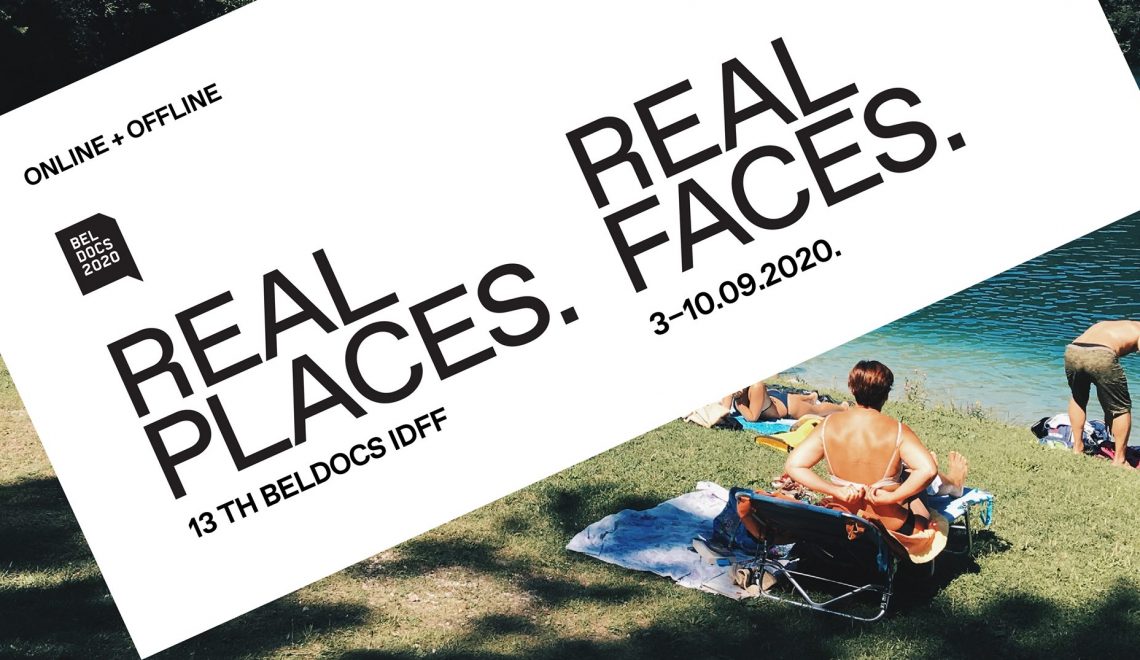