Salon of the Museum of Contemporary Art Belgrade, 14 Pariska St.

Along with skyrocketing progress made especially in the IT industry, which nowadays seems to permeate all facets of human existence, Dragan Zdravkovic appears to have identified himself with his time as a close witness to the development of digital technologies.  He creates his own space, which, in the wake of contemporary trends in the society and conditions imposed by new technologies, which he describes as a hibernation mode wherein, like a computer, he plugs himself into “operational mode” but he is not doing his best because he is saving energy and gathering strength, so as to keep away from the harsh social reality. Thus, in a symbolic way, Zdravković attempts to get away from reality and socio-political system he lives in, and “saves” personal and creative energy aiming at giving his best, through the process of artistic production, and forging a world of experience of one’s own reality isolated from the flow of day to day affairs and, thereby, on the brink of metaphysical insights. 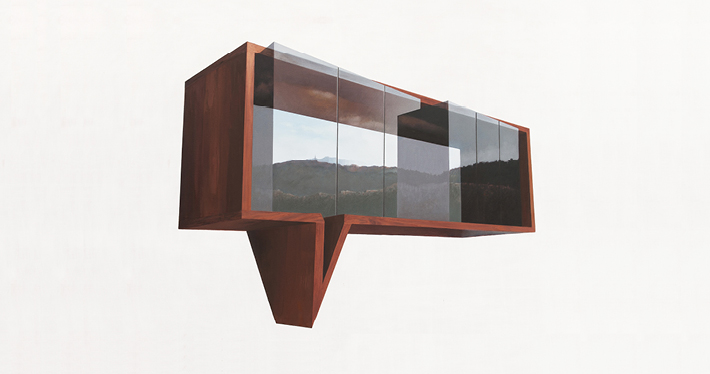 Presenting non-verbal transcripts of space, his paintings are reminiscent of another kind of time gate intended for entering into deserted expanses– sites of another dimension of reality, a reality isolated from social reality, where all of us can come in, meet each other and identify, singling out the sites where time is dispossessed of its force, slowing its pace, describing the visible, outer manifestation, which does not define the inner mode of mental activity but rather a mode of personal hibernation, like the processes used by technological products of contemporary society. Behind these seemingly perfect landscapes on his paintings devoid of human figures, Zdravković aims at discreetly emphasising and prompting reflection on the issues of contemporary man and his alienation, caused by the pressures of everything that the fast lane of life and the imposition of socio-political norms bring  today. His paintings are dominated by tranquillity and silence leading the viewer to wonder what really takes place behind the realistic depiction of the situation in a painting, thereby introducing us to our own mode of hibernation. Besides being a form of protest, for him art has also become a site of artist’s refuge from hectic and insecure reality into the Arcadian worlds of “ideal” order and harmony, of the dignity restored to Mankind and Nature.

Dragan Zdravković (Beograd, 1969) graduated from the Department of Painting at the Faculty of Fine Arts (ALU) in Belgrade (1994), and received MA from the same department in 1999. In 2011 he obtained fellowship for an art-research programme in Germany (Leipzig), LIA (Leipzig International Art Programme). He lectured at SACI (Studio Art Centres International, New York/Firenze) as a visiting professor (2004), and as a tenured professor at ALU, Belgrade (until 2014). He is one of the lecturers in “Outsideproject”―a summer school programme in Firenze (2005-2007). Also, he is one of the founders of Centre for international Art Studies – CMUS in Belgrade; an international selector (upon invitation) in 3rd International Engraving Biennal of Douro – 2005 (Portugal); a member of the art council of the 73 Gallery, Belgrade (2007-2013). Since 2014, he teaches drawing and painting at the Faculty of Applied Arts in Belgrade. Currently, he is completing his PhD studies (ALU, Beograd) with Vladimir Veličković as his mentor.

Some of his works are included in a number of museum and gallery collections, as well as in private collections: Museu do Douro (Portugal), Madlena Zepter art collection, Museum of the Town of Mladenovac, CZK – Sopot, GAK Narodni Front (Belgrade), LIA―Lepizig International Art-Programme (A-L. Rolland), and in private collections in Berlin (A. Schlag/IMV GmbH), Lepizig (Lenzer), Vienna (Zepter), Belgrade. He actively exhibits in group and solo shows in Serbia, his home country and abroad since 1993.