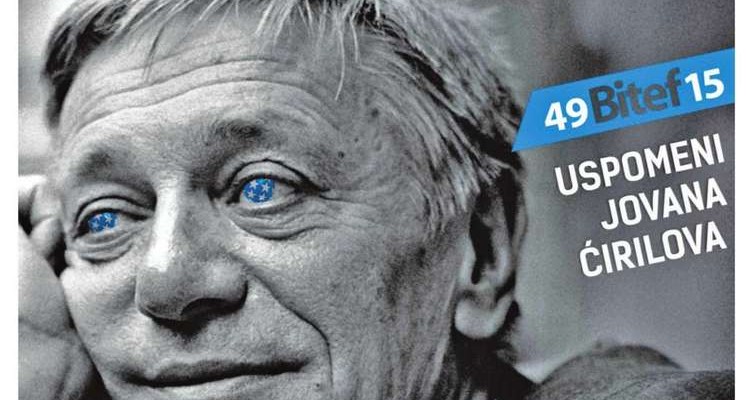 Held under the motto “In Memory of Jovan Ćirilov”, BITEF 2015 will take place in Belgrade and Novi Sad from September 17 to 24. The 49th Bitef will present theatrical companies from Serbia, France, Germany, Russia, Croatia and Slovenia. To read more about 49th BITEF and its program, visit festival.bitef.rs

The Festival selector Anja Suša said that this is the first BITEF without the selector Jovan Ćirilov and that program will be rich and diverse. ” The idea behind it  is not just to pay tribute to Jovan Ćirilov, who undoubtedly deserves it, but to remind the public of a firm bond between him and what we consider the precious BITEF  heritage, which obliges us all when we think about the future of this festival.”

BITEF  nurtures three repertoire lines – international theater, which is a sort of information to local cultural community and the audience; regional theater practice from the so-called ex Yugoslav region and the 3rd line that has been established last year – New Theater Tendencies that this time deal with the political theater.

The 49th BITEF will open with a play from Berlin, “Murmel, Murmel” at the National Theater in Belgrade, written by Dieter Roth and directed by Herbert Fritsch. The festival will be closed at Terazije Theater with a play by Moscow Gogol Center “Dead Souls” by Kirill Serebrennikov.  “Common Ground” by Yael Ronen,will be coming from Germany while France theatretical scene will be presented with a play “Adishatz / Adieu” by Jonathan Capdevielle (only in Novi Sad). These two plays are presenting the political theater. The same selection includes the Dutch-Serbian production “The Discreet Charm of Marxism” by Bojan Djordjev, “Komplex Ristić” by Oliver Frljić (in co production of Slovenia, Croatia, Serbia and Macedonia), as well as theater play by Belgrade’s Center for Cultural Decontamination, “Ibsen’s Enemy of the People as a Brechtian Teaching Play” by Zlatko Paković.

Part of the 49th Bitef are Slovenian plays “Iliad” inspired by Homer and directed by Jernej Lorenci, “The Death of Ivan Ilych” by Serbian National Theater from Novi Sad by Tomi Janežič and “We are Kings and not Humans”by Croatian National Theater, directed and choreographed by Matija Ferlin.

The supporting program consists of traditional segments Bitef on Film and BITEF Polyphony and for the first time, Bitef Zone. Bitef on Film is being held at the Museum of Yugoslav Film Archive in the Kosovska Street and it presents 3 documentary films about theater plays that have marked the history of Bitef – Einstein on the Beach by Robert Wilson, The Rite of Spring and Cafe Mueller by Pina Bausch and Consumed by Borut Šeparović.

Admission to  four theater plays by theatrical companies from Spain, Croatia, Montenegro and Austria costs 250 dinars, whilst admission to other events is free of charge !

Bitef Zone is being held for the first time this year in front of the Bitef Theater and it explores, maps, produces and incorporates different cultural and artistic contents happening in open air in front of the theatre founded by Mira Trailović. Bitef Zone starts on September 12 and lasts until September 24 when the 49th Bitef Festival will be closed.

Tickets cost 1000, 1500 and 2000 dinars and are available at the box office of Terazije Theater. Ticket reservation can be made until the 30th of August, with 10% discount. If you reserve a set of tickets for all performances, discount is 20%.