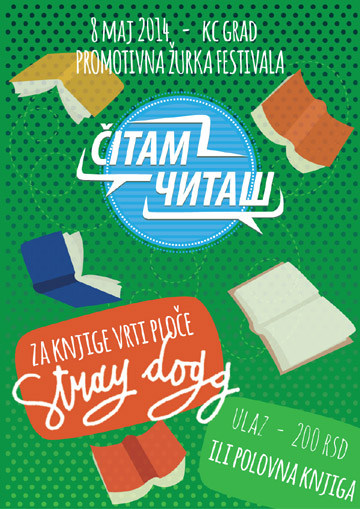 Dear readers, as you make a break from reading we invite you to come to the party! Festival ČitamČitaš that aims popularization of books and reading, is organizing a promotional party on Thursday 8th May of 2014. With this party we are announcing the festival ČitamČitaš which will be held on the 21st and 22nd of June on Kosancicev venac. Instead of money you can get your ticket by donating book and team of ČitamČitas festival will make sure that it finds its reader. On this occasion, the band Stray Dogg supports reading and spinning “records”!

Stray Dogg is an indie-rock band from Belgrade which formed in 2011.  Their sound is based on the melancholic indie-rock , also is recognizable for its unusual playing “non-genre Americana.” After two albums and a few dozen shows, the team consisting of Dušan, Jelena, Ana, Marko, Vladimir and Galleria are dj’s and will play the music that they listen from their private records, cassettes, CDs, Internet, Tom Waits, Bruce Springsteen, Blood Orange, Morphine, The Black Keys, Bajaga, Voodoo Popeye, Kenny Rogers …